So who would have figured that after telling two of my friends that I was too valuable of an ISO leader to be paired with them, I wind up leading a group with them? 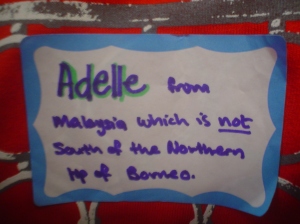 A useful piece of info about my partner on her name tag. Found out she was in my group after telling her that we couldn't possibly be in a group together.

Today, one of our most respected international affairs faculty members led an excellent session on leadership. I was fortunate enough to be given the task of observing a group of ISO leaders complete a project, taking notes on how they performed as leaders. It was an amazing eye opening experience, and I learned a lot about leadership. I’ll probably write more about what I learned later.

Anyway, training ended today and we received our shirts, which are bright red with silver trim. We also signed up for our individual tasks in addition to leading a group of international students.

I tried to invite James to a barbecue after ISO training. He wanted to go at first, but he called me before we took off and told me he changed his mind. I don’t know if he feels comfortable hanging out with us. It’s probably the language barrier, but he doesn’t hang out too much outside of when it’s just me, him and my roomate. I wish I knew how to get him to come out of his shell a little more. He’s a good guy, and I think he’ll do well once he makes some more solid contacts in school. 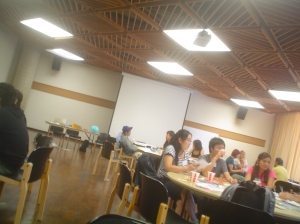